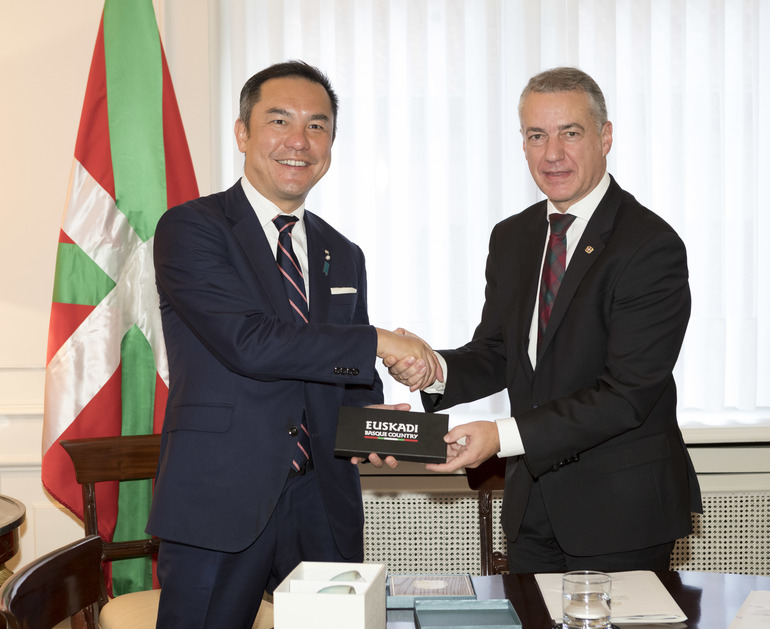 Following the signature of a first Memorandum of Understanding in October 2018, the Mie Prefecture in Japan and the Basque Country have strengthened their partnership in terms of industrial policy, food culture and cultural tourism.

The Lehendakari remarked during his speech that Japan is a priority for action in the Basque Country 2020 Internationalisation Strategy. He described it as “an industrial country, at the forefront of technology and with a high level of development that has known how to maintain and to value its traditions and identity.” He also highlighted the special significance for the opportunity for exchange of this country offered by the Olympic Games to be held in Japan next year.

The Lehendakari Iñigo Urkullu highlighted industry, food and cultural tourism as the three specific areas that are intended to be developed within the partnership between the Region of Mie and the Basque Country.

In terms of industrial policy, the Lehendakari highlighted the significant advances, including the inauguration of the first floor of the company Gestamp in Japan. The Lehendakari also announced that, following the initial stage, both parties have agreed to continue to work towards promoting trade, business and direct investment in areas such as automotion, aeronautics, machinery and food industries.

With regard to food culture, the Lehendakari announced that Mie and the Basque Country have decided to promote partnership and exchange between aspiring young people and local chefs. “The purpose is the development of talent and the promotion of local food culture”, he added.

In relation to cultural tourism, the Lehendakari Iñigo Urkullu reported that progress is being made in the signature of a partnership agreement in relation to the world heritage pilgrimage routes. “We have shared the experiences of the northern routes on the Camino de Santiago pilgrimage route and the sacred sites and pilgrimage routes in the Kii Mountain Range in Mie”, he said.